I have wanted to make a change to my hair for a while now...but I was thinking more of cutting it to my shoulders. I showed my hairdresser the picture, told her where I wanted it...and put my poor innocent hair in her hands.

When she made the first cut I was okay.

But then came the second, third and fourth cuts and I began to internally hyperventilate.

My hairdresser is a great friend of mine, but she talks way too much and doesn't really pay that much attention. So there I was, mentally bawling my eyes out and just hoping all would be well in the end. She just kept snipping and talking and telling me how cute it was going to be and how much I was going to loooove it.

When she was finally done, I nearly passed out. I have never done anything so drastic to my hair.
Minus a 6th grade chili-bowl. But who wants to re-live that?!
I just pretend it didn't happen.
Anyways, it wasn't terrible by any means, she did a good job...on whatever she was trying to achieve.
But my dreams of ponytails and airdrying my hair went up in smoke right in front of my eyes.

After I was able to calm myself down though, I have decided that this haircut isn't going to be so bad. I actually like it and after-all wasn't change what I was going for?

Plus...it's only hair and it will grow back. So anyways...here it is! 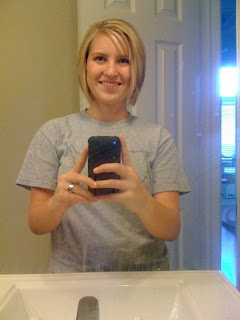 I think it's starting to grow on me. HAHA literally!
But seriously, I think I'm going to like it just fine!
:)
Posted by LBMM