After a trip from one end of Texas to the other, I am finally back home. It's weird how simply sitting in a car can wear you out almost as much as running a couple of miles!

Sometime last week, Taylor and I decided to take a quick trip to San Antonio so we could celebrate the start of Taylor's pilot training class. When I say sometime last week and quick trip, I mean that we decided on Monday to go, I left here on Wednesday, we checked into our hotel on Thursday, and we were back in Del Rio by Saturday.

Once our San Antonio plans were finalized, we decided to extend our trip to Lubbock. Since Taylor will be busy for the next year or so, he wanted to spend some time with his family. I got to tag along because I love me some Veretts!

SO, I left home on Wednesday and drove to Del Rio for the night and then we got up and headed to San Antonio on Thursday afternoon. After getting settled in, we walked to Sushi Zushi in downtown and oh my full belly. I ate so much that I barely made it back to the hotel before I slipped into a food coma. I have never had sushi that delicious and I'm counting down the hours until I can go back.

On Friday, we decided to walk a couple of blocks to the Riverwalk and the Alamo. Fortunately/unfortunately it was two days after the 175th Texas Independence Day so there were kids everywhere. I really had to restrain myself from telling kids to stop climbing the walls of the Alamo. 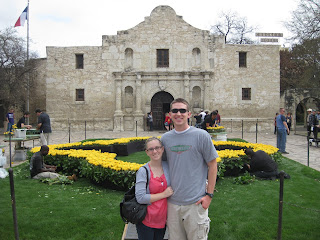 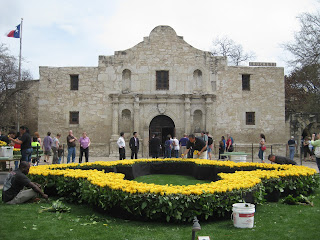 Luckily we were able to get a decent picture in front of the Alamo without too many people in front of it. While we were there, they were constructing some sort of shape with yellow roses. 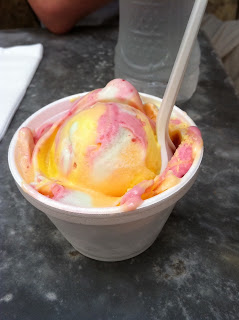 On our way back through the Riverwalk to our hotel, we found a nice Ice cream/gelato shop. Taylor had plain vanilla and I got this pretty rainbow flavor. An older couple in the ice cream shop told the owner that they didn't need his help choosing a flavor because they go to Italy all the time and they KNOW gelato.

After our afternoon excursion, we headed back to the hotel and
napped until it was time for..... 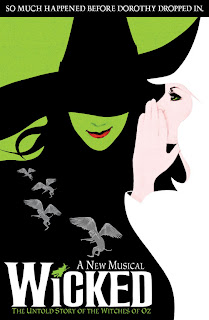 Taylor and I thought seeing Wicked would be really fun and it also happened to be the last show during San Antonio so we didn't want to miss this opportunity. We were not disappointed! I loved it so much! I think Taylor even had a good time. 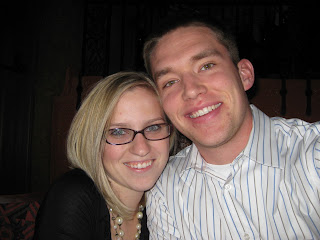 I may have gotten in trouble for taking this picture. They are strict at the Majestic theater! I just wanted to document the moment, people!
On Saturday we drove back to Del Rio for the night and then woke up bright and early for the long drive to Lubbock on Sunday.
There happens to be a stretch of 80 miles with ZERO civilization and I may or may not have had a full bladder the entire 80 miles. Taylor graciously stopped as soon as we found indoor plumbing though so crisis averted. Also, those 80 miles were full of twists and turns and no shoulders on the roads.
While we were in Lubbock, we met up with a couple of Taylor's friends for lunch, and got to enjoy some quality Verett time.
On Wednesday, we said our goodbyes and made the drive back to Del Rio. On our way back, we stopped in Ozona, Texas and found an indoor Sonic. Is that even legal?
I spent one more night in Del Rio before heading home on Thursday. As usual, I didn't want to leave so I took my sweet time getting ready to leave and before I knew it, 2pm had rolled around. Oopsie.
My trip home though was one of the more eventful. In Uvalde, I saw 7 Border Patrol officers and TWELVE regular police officers stopped at a car wash and arresting one person. Holy cow!
Then in San Antonio, there was a really bad wreck that completely blocked 3 out of 4 lanes so it took an hour to get out of the city. Plus, it was also around 4:30 and I think some of that was work traffic. Austin happened to be just as bad, but in two separate places. One delay was because a road light fell into one of the lanes. Just try to picture that. I'm not sure how it happened, but I do know that a lot of people lost their minds over it and forgot how to drive. I can usually make the drive from Del Rio to my house in about 5 hours, but this time it took me almost 8.
So, just to recap in case you got lost throughout all of our travels...Frost, Del Rio, San Antonio, Del Rio, Lubbock, Del Rio, Frost. I think that I spent a total of 30 or so hours in the car over the week. Although we had lots of fun, I will not be riding or driving anywhere in the near future.
I'm so glad I got to spend so much time with Taylor before I lose him to pilot training! Hopefully after I recover from my car aversion, I will be able to make another Del Rio trip soon. I'm already excited!
Posted by LBMM