Oh my, so much has happened since I updated this thing.

The biggest event of course being that Taylor asked me to marry him! Woohoo!!

Words cannot describe how excited I am to start this new chapter with Taylor. Thinking about getting married and actually beginning the getting married process are two completely different things. We don't have anything really set in stone at this point, but right now we are planning on sometime around Taylor's graduation from pilot training next spring!

I guess I'll go ahead and write down the story so I can have it documented even though I've already told EVERYONE I know.

The wheels were set in motion a couple of weeks ago when Taylor casually mentioned wanting to go to College Station for the upcoming long weekend. Of course I jumped at the chance to get in some Seidel time so I was fully on board. I thought it was a little weird that he kept asking me if I had taken off work for Columbus day, but a proposal was the last thing on my mind.

We arrived in College Station late Friday night and enjoyed catching up with good friends. On Saturday, Taylor and I planned to go on a date to a restaurant in Downtown Bryan that we frequented during college, however the Texas Red's Festival that we were unaware of had closed down all of downtown for  Saturday. So instead, we just stayed in and had dinner with friends. On Sunday, Taylor suggested that we go on a lunch date instead of a dinner date. Sadly, Caffe Capri was closed on Sundays so we settled on sushi instead. I was not disappointed in our alternate choice. After lunch, Taylor said he wanted to get some ice cream in downtown Bryan. We normally don't go for ice cream since I am lactose intolerant but I went along with it because I secretly had a plan to drag him to the place we met in Bryan and take a picture out front. Little did I know...

We found a parking spot across from the Ice cream shop that ended up being closed. (Turns out all of downtown closes on Sundays.) I was not to be deterred from my plan, so I convinced Taylor to "just walk around" and hoped that we would walk up on the 202 building. Once we spotted it, I pulled out my camera and made Taylor take an emo picture of us since he has longer arms. His hand was shaking which I thought was really weird. I thought he was cold and being a baby about it. 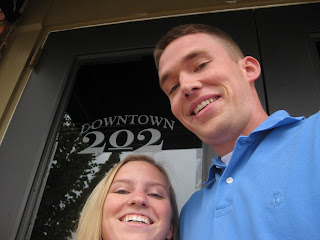 Here's the picture. It didn't go as well as I had hoped. I'm not sure why Taylor was holding the camera so low either...

After our picture, we peeked into the window of the 202 building and reminisced about the night we met and our first dance. We said some sweet things and then Taylor transitioned into his proposal! I was so caught off guard that I couldn't do anything but laugh and cry. Because that's what I do when I don't know what to do.

Since everything in downtown was closed, there was obviously no one on the streets to take our "just engaged" picture. I managed to wrangle some straggler who may or may not have been homeless to take one for us though so don't worry. I just do what it takes.

Then we headed back to Vic and Sarah's house to celebrate and it was the most perfect night ever. Until our wedding that is! Paaaarty! 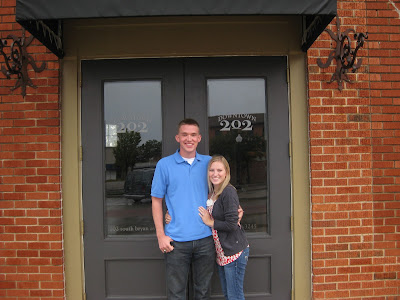 so glad I got to hear the story! so happy for you two!

Congrats Mary!! I know you are beyond excited. Not sure if you know yet, but Jeff and I are moving to London in January. I just updated my blog last night, so check it out if you'd like. Glad to see you are doing well. :)