So much Canton, so little time!

This past weekend, Mom, Katie, Kirsten and I had our annual October Canton trip. Our treasure hunt was a success! My planning of the weekend, however, was not a success. Holy tired eyeballs.

I left after school around 5 pm for a 6.5ish hour drive home. Mom, who wasn't even awake anymore when I finally got home decided to come in my room the next morning at 7:30 and announce that she was ready to go.

Um, nice to see you again too, MOM.

For once in our life, we actually got to Canton fairly early. Our first stop was of course Dog Alley. I do not actually want a dog. Probably ever again in my life. I do however absolutely love looking at other people's dogs and seeing puppies play around. Adorable. If I could stare at puppies, kittens, and babies playing all day long, my life would be pretty sweet.

Also, bulldog puppies are $1500 a piece? I think not. And why do the trashiest people sell the most expensive dogs? Sell one of those and go get yourself some new teeth! I apologize for the judging but COME ON.

I would also not buy a dog from someone who makes signs like this: 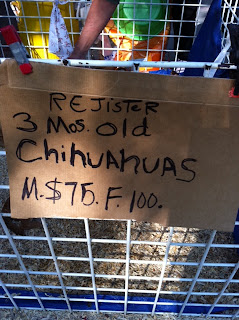 Out of all the words on this sign...that's the one they missed.

After we tore ourselves away from the cuteness and people watching heaven, we made our way over to the regular part of Canton. SO MANY PEOPLE. Everyone had wagons and carts to carry all of their children and treasures in so not only was it packed, but we were all getting run over every couple of minutes. Getting from one side of the aisle to the other was like playing a scarier version of Frogger.

There were also a ton of pregnant ladies wandering around. I've obviously never been pregnant, but I know that I get a little grumpy after walking around all day and I don't even have to carry around an extra 25 pounds around my midsection. You won't see me doing that. Ever.

One of my treasures that I picked up is a coffee table that happened to perfectly match a random end table I got at a garage sale last summer. Hello, it was fate so of course I bought it. 1/2 off I might add. I did some bargaining and got the seller down from $40 to $30 but when he went to ring me up, he said, "I told you $20, right?" Why yes you did, sir.

I didn't even have to work for that one!

Next time we take our annual trip, we will have to make it at least a 2-day event. There was so much that we weren't even able to get to. I'm thinking we should make friends with some people who have an RV and invite them along. If only Taylor's Aunt and Uncle read my blog!

After we got home - late again - I loaded up a bunch of things that I wasn't able to bring home on the plane after my last visit. 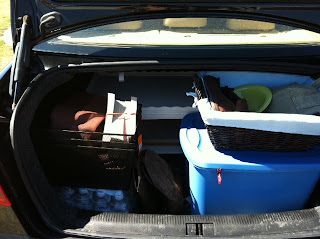 I joked that this photo is the only reason I still am even speaking to my car. There is a coffee table, countless random things and a rubbermaid tub. Plus my suitcase! I guess Hitler can stay around a little while longer. I let him know though that trunk space can be forgotten though if he has one more thing that needs replacing. Ok, so I don't really talk to my car. I just talk badly about it. All the time.

I finally got to sleep in for a little while on Sunday before making the drive back. I wish I could have seen Dad and Jess for longer, but inviting them to Canton would have been a mistake. Complaining takes on a new meaning with those two. Also, Dad has anxiety issues with big crowds. We may have had to visit a psych ward after a couple of hours with all of those people.

Even though my trip was crazy fast and I was beyond exhausted when I got home on Sunday, I'm so glad I decided to go. It's a good thing Taylor is driving this weekend, because we've got another long trip planned! This time for College Station. You should expect lots of adorable pictures of Me and Atticus because I'll of course be hogging him all to myself again. Sorry Taylor!

Well guess what you're in luck. My parents just bought an RV hahaha...