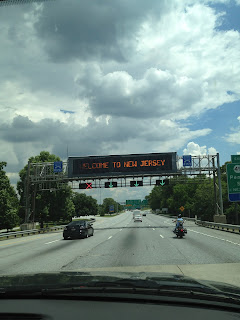 We left Del Rio on a Thursday night so that we could spend some time with his parents and Grandmother. The next morning after I almost broke the shower forever, we set out on our first actual day of travel. I had been dying to see Vic and Sarah before we left Texas so I convinced Taylor that our first leg should be to College Station. We planned our drive so that we could get into town early enough so that he could have new tires put on his truck before we set out driving 2000 miles. After a couple of hours waiting for the tires, we realized just as we were about to leave that they had put on the wrong size. (oopsies!) So we waited just a little longer while they fixed their oopsie and then the real fun began! 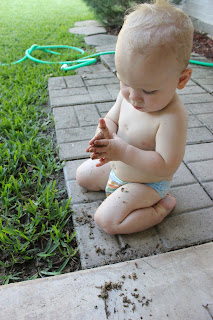 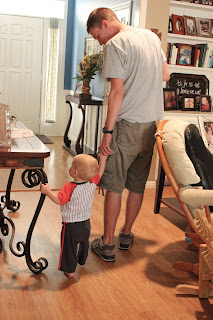 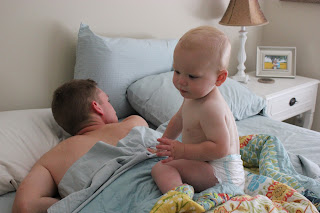 Atticus kept us fully entertained and even thought we were kind of funny! Vic of course made us a tasty meal and then we spent the rest of the night hanging out on the back porch. We love those people so much and it was unbelievably hard to drive away the next morning. (A one night stay is such a tease!)

Our next stop was Louisiana. (Side note: I had a goal of getting a sign at every state line but it turns out that other states don't care about being welcoming to visitors. Sad.)

Anyways, Louisiana was everything we thought it would be. Casinos, cajun food, and slightly smelly. We stayed at a really nice hotel though, and even had the pleasure of being entertained by watching the Miss Teen Louisiana contestants parade through the lobby. (I will have you know that if it hadn't been for their obvious luggage and accessories in tow, I wouldn't have known what they were doing there. Lots of work goes into the transformations...)

The next morning we started our drive through Mississippi towards Alabama. Mississippi was interesting to say the least. At one gas station we stopped at, the cashier and another customer agreed that every person in America should be issued government assistance for food purchases. The cashier's reasoning was of course, "You know, so you can buy snacks and candy for your kids. Because that stuff's expensive." I wish I were kidding.

Our stop for that night was in Birmingham, Alabama and just as we were rolling in my friend, Callen texted me to ask what part of Alabama we were in. Turns out, we were in opposite sides of the state! So we had a picture catch up and it almost felt like we got to visit. Then, we found some delicious latin/american food thanks to a friend of Taylor's sister. As we were waiting in line, a lady approached me and asked if I was an Aggie. (My ring caught her attention.) I said that I was and as we started talking, I found out that her husband flew KC-10's and was stationed at McGuire! How random! She was so sweet and our conversation made me appreciate the Aggie Network and the Long Blue Line.

Since our next day of travel included Atlanta, we decided to make a pitstop at the Coca Cola Museum. The night before, we planned our route and bought 11:00 a.m. tickets with the idea that we would arrive in Atlanta around 10:30 a.m. Well, we arrived at 11:30 because we completely forgot that we would be crossing into another time zone! Luckily, it was a weekday morning so the museum was deserted and they let us go in an hour later than the time on our tickets. We had a great time learning all about Coca Cola. I was surprised at how much I didn't know about such an iconic brand! If you ever decide to go, please take my advice and skip out on the 4D movie. The seat movement didn't really have much to do with the content of the movie and felt like it was just there for the sake of handing out free concussions. Also, at one point and for no apparent reason, there's a pretty harsh poke in the back. I almost asked Taylor to check for bleeding.

One part of the museum I was really looking forward to was the Coke-testing area. I thought we would be able to taste all of the different flavors and products that they make, but in reality it was tasting all of the different products around the world. I have to say that America does this right. I didn't take more than a sip of each flavor, but for some of the flavors, a sip was more than enough. Yucky.

After the museum , we made our way to our good friend's parent's house. They were so sweet to feed and let us crash for the night. The next morning, we even got a tour of downtown Greenville, South Carolina. I almost wanted to skip the rest of our journey and just buy a house down there. I loved every single minute of our time in Greenville.

Our goal after leaving Greenville was to make it to Richmond, Virginia for the night. However, a couple of hours into our drive when we stopped for a bathroom break, I happened to walk by our trailer and heard a loud hissing noise. Womp, womp, womp. Leaky tire. (The tire was so old and worn that it just split!) We called U-Haul's roadside assistance and waited AN HOUR AND A HALF (!) for someone to come change our tire. After five minutes of actual labor later from tweedle dee and tweedle ding dong, we were on our way into North Carolina. 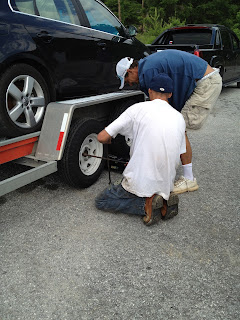 This is where our story takes a comical turn.

Since we didn't leave Greenville until about 2 p.m. and then waited so long for a new tire, we were soon ready for dinner. We pulled off the highway and once again as I was walking by the trailer, I heard another hissing sound from the tires. I thought I was going slightly crazy, but as I got closer, I realized that we did indeed have another leaky tire. (Opposite side of the trailer, this time.) SERIOUSLY. We called our new BFFs at U-Haul and they said someone would be out in about 45 minutes. So we enjoyed some yummy tasty Bojangles and waited for another hour for the new tire to show up. Finally, our rescuer came to replace the flat tire and we were on our way once again. 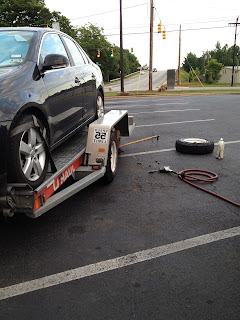 Our quick 5 hour drive for the day had suddenly turned into a 10-plus hour drive and around midnight, we finally pulled into Richmond. I don't remember much about going to bed that night except that I was too tired to even care that our room smelled like it had been on fire recently.

The next morning was supposed to be our last travel day and only take about 3-4 hours. Our plan was to meet up with Taylor's sister for lunch and then a few more miles down the road, our really good friend for dinner. We had so much fun catching up with our friends though that we decided to extend our trip one more day. Plus, when someone offers you a free bed for the night, you take it! 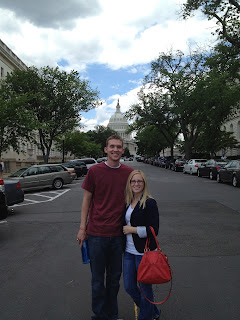 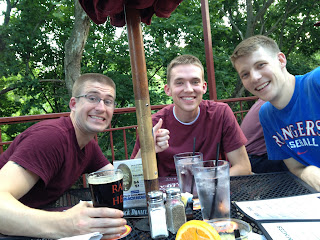 FINALLY, the next day we arrived at our new home. Only to get word that we will be leaving again shortly. (Bummer!) Also, once we got here, we found out that there weren't any rooms at the hotel on base or in any of the nearby towns to stay at. Luckily we got it all worked out before bedtime, but it wasn't all that pleasant. We stayed at one hotel for a couple of nights and then we finally got a room on base for the rest of our time here. One without solid internet, but I guess in the end, a bed is a bed.


So, this is where our moving story takes a pause. Just before we got here, we found out that we will be headed to the West Coast for a few months while Taylor does some of the training for his new plane. Not exactly in our plans, but you do what you gotta' do I guess. I'll share more of that story later!

"free concussions" this part made me actually BAHA so loud my neighbors probably heard me!! You're so funny Mary! Can't wait to see the next post! Glad y'all got there safely.

Wow, what a journey! So glad you made it safely and documented your travels.

Also, your red bag is so cute!